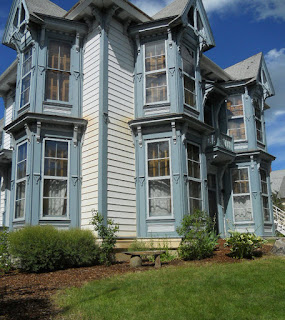 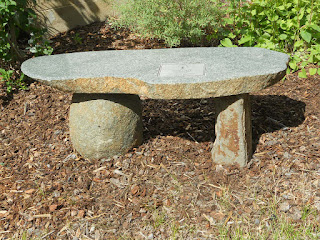 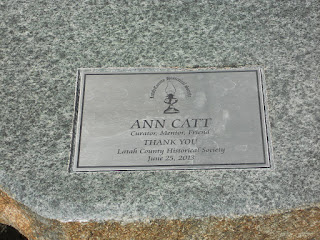 If you happen to visit McConnell Mansion in the coming months, you can pause and rest on the bench dedicated to retiring Museum Curator, Ann Catt. The bench was donated by the Board of Trustees, it was installed on June 25, 2013. The bench blends in beautifully with its surroundings. It's located to the right of the front porch, directly behind the McConnell Mansion sign.
Posted by Latah County Historical Society at 3:38 PM No comments:

“Born in England in the 1880s to a hellfire Congregationalist minister, Frank Bruce Robinson emigrated to Canada when his step-mother forced him from home. Discharged from the Royal Canadian Mounted Police and the United States Navy for alcoholism, Robinson became a druggist in Oregon and Arizona, moving to Moscow, Idaho, in the late 1920’s” (Peterson).

Something happened to Frank Robinson in the interim. The Spirit of God talked to him, and gave him a message. He set out to share this message with the world, through his new religion, Psychiana, which became the world’s largest mail order religion. He operated his business from Moscow, Idaho for two decades, from the 1920’s to the 1940’s. During the height of his success, Robinson employed over a hundred people. He kept them busy assembling and mailing out his lessons, advertisements, brochures and books on Psychiana.

“…Robinson disbelieved in heaven and hell. His was not ‘pie in the sky’ religion. All desires could be met on earth. People were rewarded or punished on earth for good or bad works. But he did believe in eternal life. The soul—or Life Impulse—could not die.” Psychiana was a self-help religion, rational, and “partially secular and non-Christian”. Adherents could obtain “happiness, health, and financial prosperity” through the God Power (Peterson).

Robinson never promoted his religion locally, he didn’t want his family to be discriminated against. He did use his wealth to benefit the community. He gave to local charities, created the first youth center, and donated the land that became Robinson Park.

The quotes and information in this blog post are from From Psychiana: The Psychological Religion by Keith C. Peterson. The Latah County Historical Society has booklets available if anyone is interested in learning more about Frank Robinson and Psychiana.

Our Psychiana collection includes documents, advertisements, and other memorabilia, as well as several photos of Frank Robinson and his business. Robinson’s satchel and collar are on loan for an exhibit at the State Museum in Boise for Idaho Territory’s sesquicentennial. You can see a photo of the exhibit in our June 2013 newsletter or go to the Idaho State Historical Society’s website.

Text from the Psychiana Quarterly ad:

Dr. Robinson’s ‘Realization’ Secret
Ten years ago Dr. Robinson was an obscure and unknown drug clerk, working in a drug store in Moscow, Idaho. He was heavily in debt. He had less than $40.00 to his name and had he lost his job in this drug store, he would not have had enough money to get to the next town. With a wife and family dependent upon him he lived in obscurity in a rented apartment, had no life insurance, no car, no bank account—in fact at the age of forty-three could very safely be called a FAILURE. True—he could always land a “job” in the drug business, but as far as making his influence felt in the world—well—it looked as if he would never do that. The future looked black. Nothing but stark and absolute discouragement faced him. He pictured the future as being merely an existence, and not a very pleasant one at that.
What Is the Secret of This Success?
This question has been asked Dr. Robinson many times. His answer lies in a book he has recently published, entitled “DR ROBINSON’S REALIZATON SECRET.” The book sells for one dollar only, and it will be well for every man and woman interested in success to read this remarkable book. Send a one-dollar bill or money order to “PSYCHIANA,” Moscow, Idaho, and the book will be sent to you by return mail. Remember—IT COSTS ONLY ONE DOLLAR.
PRINT YOUR NAME AND ADDRESS PLAINLY ON THIS FORM AND MAIL WITH $1.00. IT MIGHT VERY EASILY BE THAT THIS BOOK MIGHT CONTAIN THE SECRET YOU WANT TO KNOW.

Katherine Campbell was a member of the Moscow High School graduating class of 1928. She grew up on a ranch near Genesee with her parents, George and Minnie Campbell, and her brother, Ray.

The Latah County Historical Society has received a few delightful items commemorating Kay's time at Moscow High School. Among the items are a a quilt top with "MHS--1928" on the center square, probably sewn by Kay's mother. The quilt has initials that are most likely from high school friends. We have also received an initialed handkerchief, a tassel that might be from Kay's graduation cap, as well as the above photos.

Kay worked for her room and board during high school, this prevented her from taking part in any after school activities. However, Kay was an "A" student, and she mentioned being offered a scholarship to Stanford (but her parents wouldn't allow her to to travel so far away from home). After graduation, Kay moved to Spokane and married Roy Wagner.

Kay passed away in December 2012, leaving these items to a family friend, Joyce Matthys. As Kay had no descendants, Joyce sent the items to Moscow High School, and they donated the items to LCHS.

We are most pleased to be able to add these items to our collection. MHS has Kay's yearbook in their collection.

Posted by Latah County Historical Society at 3:07 PM No comments: