The Latah County Historical Society marks 40 years carrying on a local tradition whose origins date back over a century when it hosts its annual ice cream social this Sunday, July 26th, at the McConnell Mansion in Moscow. The event, held from 1:00-4:30 P.M. at 110 South Adams Street, is expected to attract several hundred guests to the Historical Society’s primary public venue. The Historical Society hosts several such community events every year-- including a harvest dinner, a Victorian Christmas party, and an annual potluck-- in addition to its ongoing work collecting, preserving, and cataloging local historic pictures, documents, and artifacts.

William J. McConnell, Idaho’s first two-term governor, built the McConnell Mansion in 1886, and his wife, Louisa, became well-known for the ice cream socials she held there around the turn of the 20th century. The Historical Society’s ice cream socials still honor Louisa’s memory with features such as the esoteric inclusion of fresh pineapple as an ice cream topping-- something she always insisted on when hosting her own parties.

This year’s event will involve street closures in the area of 2nd and Adams to make room for a variety of activities, including live music, a water balloon toss, a seed-spitting contest, lace-making, and horse-and-wagon rides. Representatives of the Moscow fire department and the historical reenactment group Hog Heaven Muzzleloaders will be in attendance to make presentations for guests.

Attendance is free of charge, though donations are encouraged. All ice cream is graciously provided by the DeWitt family of Moscow.

This article was written by Cody Wendt.

A Streetview Perspective of the McConnell Mansion's Sustainability

The hot and very dry days of summer are upon us, and it's got us thinking about ways to efficiently maintain the grounds of the McConnell Mansion while also being mindful of the water needs of our entire community and region.  Such considerations seem even more important as wildfires threaten neighbors on all sides of the Palouse.

One way that we are able to conserve water is by maintaining the beautiful trees that surround the Mansion.  Earlier this spring we were pleased to welcome the Moscow Tree Commission to the grounds and serve as a test site for the new program being utilized by the group.  iTree is a free online tool developed by the USDA Forest Service that analyzes the environmental and economic benefits of the trees on any given property.  The Commission is exploring the use of iTree to enhance the Community Forestry Program.

"The i-Tree Tools help communities of all sizes to strengthen their urban forest management and advocacy efforts by quantifying the structure of community trees and the environmental services that trees provide.  Since the initial release of the i-Tree Tools in August 2006, numerous communities, non-profit organizations, consultants, volunteers and students have used i-Tree to report on individual trees, parcels, neighborhoods, cities, and even entire states. By understanding the local, tangible ecosystem services that trees provide, i-Tree users can link urban forest management activities with environmental quality and community livability. Whether your interest is a single tree or an entire forest, i-Tree provides baseline data that you can use to demonstrate value and set priorities for more effective decision-making." -- www.itreetools.org

Members of the Moscow Tree Commission took measurements of the 34 trees that grow on the McConnell Mansion property.  Those figures were then put into the iTree Design program, which "allows anyone to make a simple estimation of the benefits provided by individual trees. With inputs of location, species, tree size, and condition, users will receive an understanding of tree benefits related to greenhouse gas mitigation, air quality improvements, and stormwater interception. With the additional step of drawing a building footprint – and virtually 'planting' or placing a tree – tree effects on building energy use can be evaluated." The results provided by the iTree report were wonderfully informative.  For example, one report focused specifically on carbon dioxide revealed that our trees will sequester 1,257 pounds of CO2 this year.  The report put that value into perspective when it noted that a flight from LA to NYC which releases ~1,400 pounds of CO2 per passenger.  In total, the iTree Design software produced six separate reports from the data that took just a few hours to gather.


To find out more about how to use the iTree program, I encourage you to contact the Moscow Tree Commission.  You should also take a look at their Tree Selection Guide for Street Tree Planting.  Representatives from the commission will also be available at this year's 40th Annual Ice Cream Social on July 26th to answer any questions you might have about the iTree program.

Below is the summary report of the benefits provided by the 34 trees that share 110 South Adams Street with the McConnell Mansion. 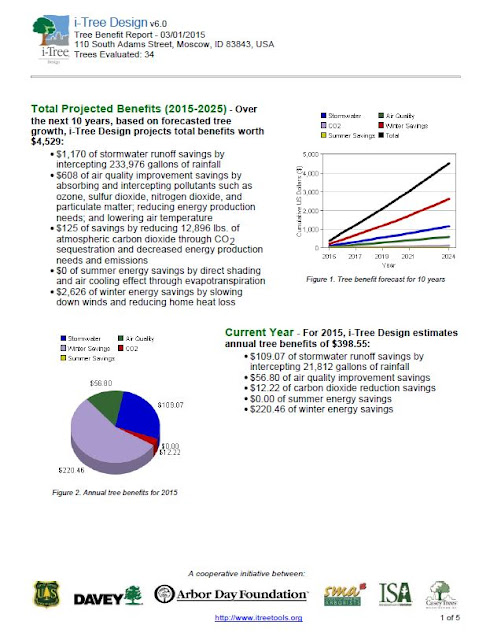 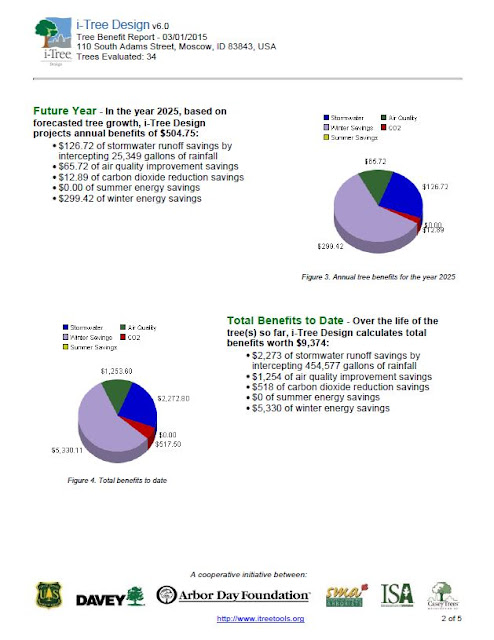 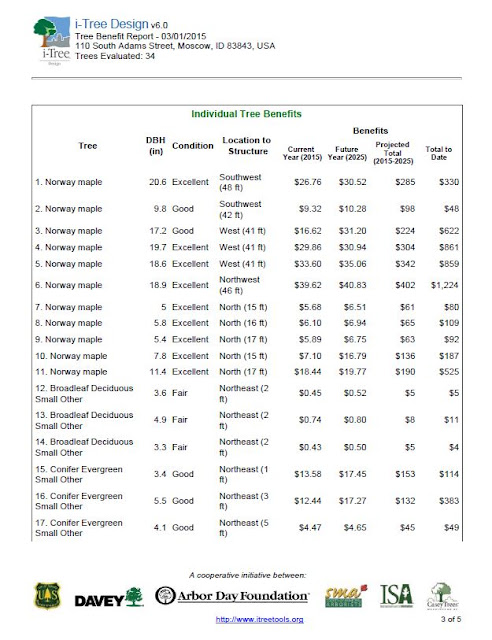 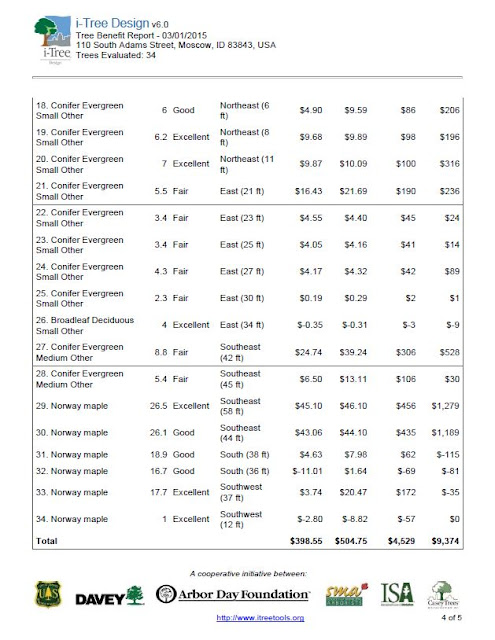 Posted by Latah County Historical Society at 11:39 AM No comments: