For the last three years, National Museum of Women in the Arts has been the driving force behind the #5WomenArtists campaign. The museum's mission is to "address gender imbalance in the art world" all year long. Did you know that among major permanent collections in U.S. galleries and museums, only 3-5% are works by women artists? Women's History Month creates a unique opportunity to capture the attention of a wide audience. 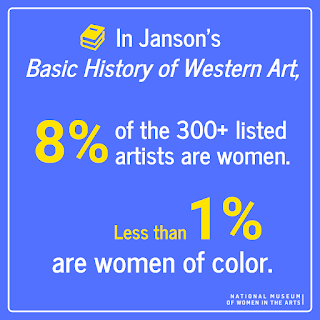 The DC-based museum is home to a truly amazing collection of artwork from women across the country and the world. It also encourages the celebration of women artists in every community in America. We've decided to take the #5WomenArtists Challenge and profile (in no particular order) just a handful of the amazing women who created stellar works of visual art in their lifetimes.

Mary Kirkwood came to the University of Idaho in 1930 as a professor of painting, composition, and history of painting. For four decades she inspired students to pursue excellence. Kirkwood's views on artistic style ring true today, years after her death in 1994. "Painting the human figure is to me more than satisfying. After some confusion in earlier years about keeping up with the changing movements, I came to realize that painting was more than a body of knowledge or even a way of thinking; it was a way of feeling, and feeling could not be altered casually by events outside of one's own nature or the final experience that had roots in one's youth." (Idaho's Women of Influence)

A native of southwestern Idaho, watercolorist Kay Montgomery made her home on a small farm just outside of Moscow for many years. Montgomery enjoyed experimenting with materials and often augmented her watercolor work with other mediums. She was a charter member of the Palouse Watercolor Socius. In her self-authored profile she wrote, "She usually has an idea about the direction a work is to go and uses whatever means are necessary to achieve that end, including happy accidents and mistakes." (Palouse Watercolor Socius)

Mary Norie Banks had a lifelong interest in photography, but did not begin her work as an artist behind the lens until she was in her 60s. Prior to that, she spent many years teaching English and composition at Washington State University and sharing her love for the piano with countless children in Moscow. In her later years she exhibited photos around the Northwest of subjects including the Palouse, Nez Perce, and European peoples. (The Lewiston Tribune)

For half a century painter and print-maker Genevra Sloan worked to strengthen the art community in Moscow. Sloan received her degree in fine art from the University of Idaho, where Mary Kirkwood served as one of her instructors. She discovered abstract expressionism while living outside of New York City for a time. After returning to Moscow she rented a studio downtown and painted almost daily. (The Lewiston Tribune)

Quilting is an often overlooked art form, however there are countless examples of beautiful works that please the eye and inspire the mind. Irene Furniss took up quilting after attending a folk life festival during the 1974 World's Fair in Spokane. She soon found a group of kindred spirits and helped to organize the Palouse Patchers. Separately and together the Palouse Patchers have contributed many amazing works to the community. (Latah Legacy)

BONUS! One of our blog readers took us up on the challenge and submitted another artist for our list.

Sara Joyce was a woman of many talents who adopted Idaho as her home and spent parts of the 1980s and '90s in Genesee. She worked in several mediums and you can view a number of wonderful pieces in her online portfolio. Joyce was quite humble about her work and it was not until later in her life that she exhibited in large venues, having been encouraged to do so by her family, friends, and fellow artists. (sarajoyceart.com)


We want to hear from you! Who would you include on your #5WomenArtists: Latah County Edition?

Posted by Latah County Historical Society at 11:25 AM No comments: