The shelving units roll from side to side to allow us to maximize our space in the shelving units.  However a strange thing started to happen (from since before I came on board), the shelves were drifting.  If you had to get a record from the rolling shelving you would not only have to roll open the aisle you wanted to look into, but also you had to wedge one of your feet into the shelf behind you in order to stop it from rolling back into you. 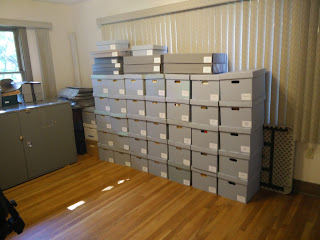 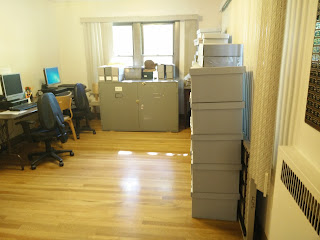 In order to fix the problem, we contacted a local architect who informed us that the south wall of the building had settled, causing the floor to fall out of level.  In order to re-inforce the floor, we had to move (almost) everything out of the housewares room in the basement to reinforce the beams underneath the rolling shelving.  This part of the project was completed about three months ago.  Now that the floor was not settling any more we still had to fix the shelving.  The shelves run on rails on top of the flooring.  Over time with the settling of the floor the rails had bent and were still out of level even though the floor had been reinforced. 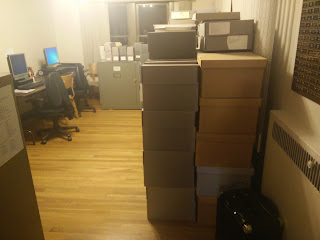 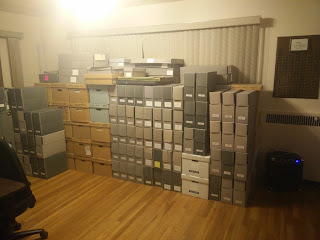 We contacted the local SpaceSaver (the company who makes the rolling shelving) representative to find out what could be done.  A maintenance technician visited the Annex about a month ago to inform us that the shelves needed to be taken out so that they could be re-layed with a steel base underneath the rails to prevent this problem from happening again.  The technician looked at the floor reinforcement and he believes that the floor will not settle further. 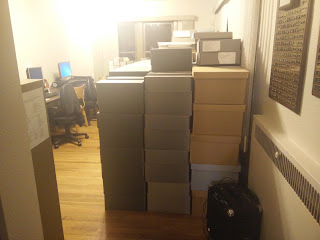 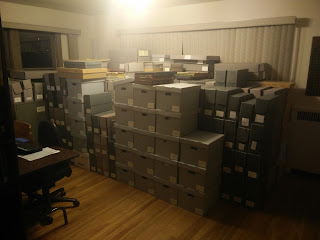 So, fast forward to June 12th, the company called and asked if the work could begin on June 22nd.  With a mix of enthusiasm and terror we accepted the start date so that we were not pushed down the list until next fall or worse.  In order to have the rolling shelving ready for the technician I had to remove all of the boxes of records from the shelving. 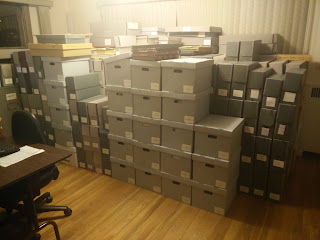 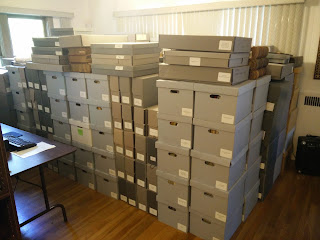 In order to do this I first made a map of where all of the boxes were.  I plan on making some changes to the organization of the boxes, however it helps to know where everything was before making major changes.  After the map of all the shelves was complete I spent the better part of two days removing all of the records to the research room, volunteer office, mail room, accessions table and oversize storage room.  The rolling shelving is now empty and ready to be fixed.  I'm very excited that the shelving will be fixed soon and look forward to the day when I can grab a box of records without precariously wedging my foot in the proper place to avoid being crushed. 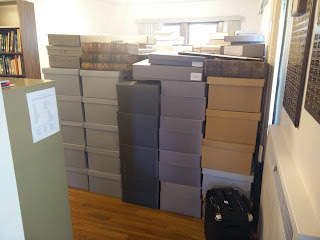 Posted by Latah County Historical Society at 4:18 PM No comments:

Last Saturday (5/30/15) I had the opportunity to head down to Kendrick to enjoy the Locust Blossom Festival.  The festival marked the 55th anniversary of the event and was a lot of fun.  The events started in the morning with a 2 and 5K run.  Then at 10am there was a parade going down main Street, which lasted for almost an hour.  After the parade a fantastic lunch was served, with proceeds benefiting the J-K Lions club.

Here are some pictures of the parade that I took while enjoying the festival. 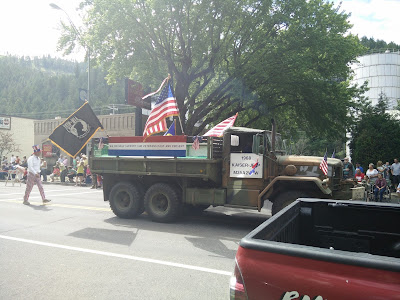 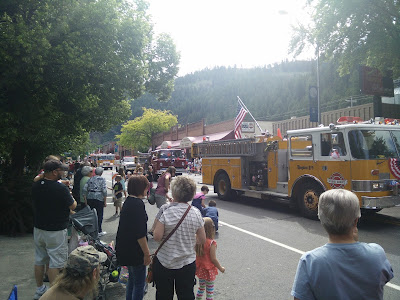 Posted by Latah County Historical Society at 4:35 PM No comments: