The Showman of Moscow

Moscow was a growing and bustling town in the late 1800s and early 1900s. There were multiple businesses arising in downtown during the first decade of the twentieth century. These buildings, modeled after Roman architecture[1], are now part of Moscow's historic district. Commercial businesses started popping up as early as 1881. Businesses really took off, however, after brick became more accessible.


One of these prominent businesses on Main Street was Williamson's. Nathaniel Williamson was an Irish immigrant who originally set up shop on the 400 block of South Main in 1904. He called his store The Greater Boston. His store featured flashy signage and advertisements from the Great Boston Horse Show and Great Fall Fairs,[2] which was uncommon during this time to have advertisements from events happening in the Eastern United States. In 1913, he leased the McConnell-McGuire building, which he turned into a department store selling furniture and clothes for men, women and children. It was stocked with imported European fabrics and was said to be the best merchandise in the new western states by the Williamson's advertisements.

Nathaniel Williamson held contests during Christmas and had annual fairs for advertisement. The annual White Fair was advertised as “the most powerful, most meritorious of any similar occurrence in the inland empire.”[3] These White Fairs featured sales for his store and prizes to be won. The fairs drew in people from all over the Palouse and ran consecutively for fifteen years, proving to be a success every time. The other tradition Williamson started was during Christmas time. Every year, he'd put up a giant Christmas tree in the McConnell-McGuire building and hold a contest for people to guess how tall the tree was. There were prizes as well as big community gatherings.

Williamson's was in business during the years leading up to World War I and the very beginning of it. In its catalogs, there was wartime propaganda for why the United States was going to join the war against Germany. At the beginning of Williamson's catalogs, political poems were printed about the strong and valiant United States and their efforts to take down the German enemy.

As Williamson's prepared to close his business, he advertised grand sales to liquidate his inventory.  In one of their final catalogs, Williamson's listed all they did to help the Moscow community. For example during the first fifteen years of their business, they paid $769,800 in taxes, rent, salaries, insurance and donations to Moscow.[4]

The Williamson building is now part of Moscow's historic district. These buildings hold stories within their walls of a new town that was just starting to gain their sense of community. They had traditions, such as the White Fair, the annual Christmas tree contest and the Williamson Fall Fair. The Fall Fair was made into the County Fair in September we all know and love. Williamson's brought in people from across the Palouse and Latah County, making Moscow a central business location. Although, Williamson's is no longer a store, its values of helping and bringing the community together still live on.


At the turn of the twentieth century, the towns west of the Rocky Mountains were economically booming. After Lewis and Clark explored the Pacific Northwest, people began settling in the Idaho Territory. The territory brought many famers and miners to northern Idaho. Moscow, originally named Paradise Valley,  was one of the first towns founded in the area in 1871 and grew to be the largest city in Latah County. Shortly after, towns throughout Latah County came into existence.


In 1905, the western American ideals of many of Latah County's residents were challenged by a proposal to found a company town north of Moscow where all of the community's property would be owned by a single business, the Potlatch Coporation. The company is based out of Spokane, Washington and bought the land in Idaho as a sawmill site. At this time, Potlatch had one of the largest sawmills in the United States. Potlatch Corp. ran the city similarly to how Pullman, WA was run. Pullman got it's name after George Pullman and his company town in Illinois. His company town was very effective and Potlatch adopted many of it's tactics, for example;  only married couples who worked within the company were allowed to rent houses and live there. They created a school, church and general store.


Despite the economic success of Potlatch, locals from neighboring cities like Troy and Moscow had their reservations. In 1905, a newspaper from Moscow was printed about the growing concerns. The mayor of Moscow, W. M. Morgan, even called Potlatch an “un-American” town. The newspaper quoted him saying, “it denied the rights of people to own property -- and follow lines of enterprise of their own choosing, characteristic of the boom-towns of the West.” To him, it was the opposite of Latah County's ideals.  There had been rumors of wood working mills, planting mills and connecting railroads in Moscow and Troy before the announcement of Potlatch. The citizens saw their towns being by-passed in much needed developments.


The employees of the company saw this as an opportunity for a better life. They were looking forward to living in low rental houses that were equipped with electricity, water and sewers, along with a good school and church for their families. They saw Potlatch as a new way of community living, one where you worked alongside your neighbors while maintaining strong family values. 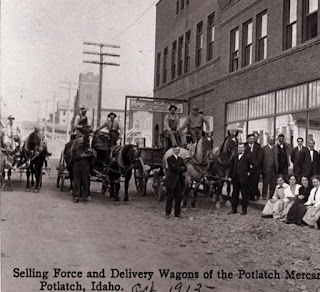 A year after Potlatch came into being, the mayor of Moscow visited the town. The Moscow Evening Journal printed an article on March 19, 1906 explaining what the mayor said about the new addition into Latah County. After his visit, mayor Morgan was inclined to take his previous reservations and insults back. He said, “In common with a great many citizens in this community, I have been prone to criticize as un-American the plan of the Potlatch company to refuse to sell a town lot, or to allow anyone to become a property holder in Potlatch. This is a mistake. The three or four hundred men who are working in this town are well fed, well housed, well paid and contented.” After praising the conditions of Potlatch he ended by saying, “by the enterprise of this company the population and taxable property of Latah County will be doubled within the next very few months.”


The sawmill in Potlatch was shut down in 1981. The town was then sold to its residents and in 1986 the commercial district was listed on the National Registrar of Historic Places. Potlatch remains to be a historical town in Latah County and still holds the same values of a close knit community that it did when it was first founded.


If you'd like to read more from these articles, please visit the Latah County Historical Society and ask to see PAM 78-3.

Posted by Latah County Historical Society at 11:11 AM 1 comment: