An Impending Crisis and a Major Achievement

During August and September of 1916 the major themes impacting the country did not change.  If anything, they became more sharply defined. Labor unrest continued. Prohibition and the temperance movement continued to be on people’s minds.  A national election was only months away. The United States still had troops on the southwestern border and continued to prepare for its eventual entry into the war in Europe.


“in which he reviewed the strike situation.’” He recommended “an enlargement  . . .of the interstate commerce commission . . . and the establishment of the 8 hour day for all railway employees operating trains interstate . . . for congressional approval for an interstate commerce commission investigation for proposed freight rate increase . . . for an amendment to the federal law providing mediation  . . . making a full public inquiry compulsory before a strike or lockout . . . (for) legislation empowering the president . . .taking control of rolling stock necessary for military use and drafting train crews  . .  into the military  service."


With the strike deadline five days away and no signs of an agreement in the near future preparations for a strike began in earnest.  The local railroads: the Northern Pacific, the Oregon-Washington Railroad and Navigation (OWR&N), and the Spokane and Inland began to make their own preparations.  Travelers were cancelling their reservations. Local agents were warned “against accepting certain classes of freight for delivery  . . . later than Saturday, September 2.”   The railroads continued to reject “every proposal” and the president continued,  “to persuade the trainmen to withdraw their strike order.” citation

Four days before  the expected strike, state guard units were being moved to large cities in their home states.  In the nation’s capitol it was generally believed “ congress will pass the eight-hour day law.” The president was urging “quick action”. The brotherhoods however were “unable to give President Wilson any assurances.” The Santa Fe railroad said it had “46 train crews . . . stationed at division points ready to man passenger, mail and express trains.”
On September 2, Congress passed the Adamson bill that allowed an eight-hour workday.  The brotherhoods indicated they would cancel the strike when the president signed the bill. Once the president signed the bill the brotherhoods called off the strike, the railroads lifted their embargoes, and” accepted the eight-hour law under protest”

The establishment of an interstate eight-hour day did not end labor unrest in the country.  In New York City in late September there was the threat of a general strike.  The city responded saying it would guard the city with a force of 12,000 men. “Twenty thousand members of the Home Defense Guard are ready for duty if needed.”    When the strike actually occurred it was not as widespread as had been hoped. Some unions decided to wait and others refused to strike.

IWW workers In Yakima who had been arrested for holding a demonstration demolished much of the jail.  The demonstration was to protest the escorting of three IWW’s to an eastbound train station. The mayor then called a meeting “to determine a policy to be pursued in dealing with other members of the organization.  Local members of the United Mine Workers have suspended work to consider whether to accept the operators wage offer

The changing military situation in Mexico and European war continued to be news.  Local men were still stationed with Pershing’s troops Arizona and Mexico.  In early August, O.R. Stillinger wrote home from Arizona describing the conditions there.    Later a description of what outpost duty at the border was printed  Five University of Idaho students were serving with the Pershing’s troop.  The Army said that these individuals “would be mustered out as soon as practical” so they could return for the beginning of the fall semester.  ” The commandant of the University cadet battalion was reassigned to a regiment stationed in Mexico. 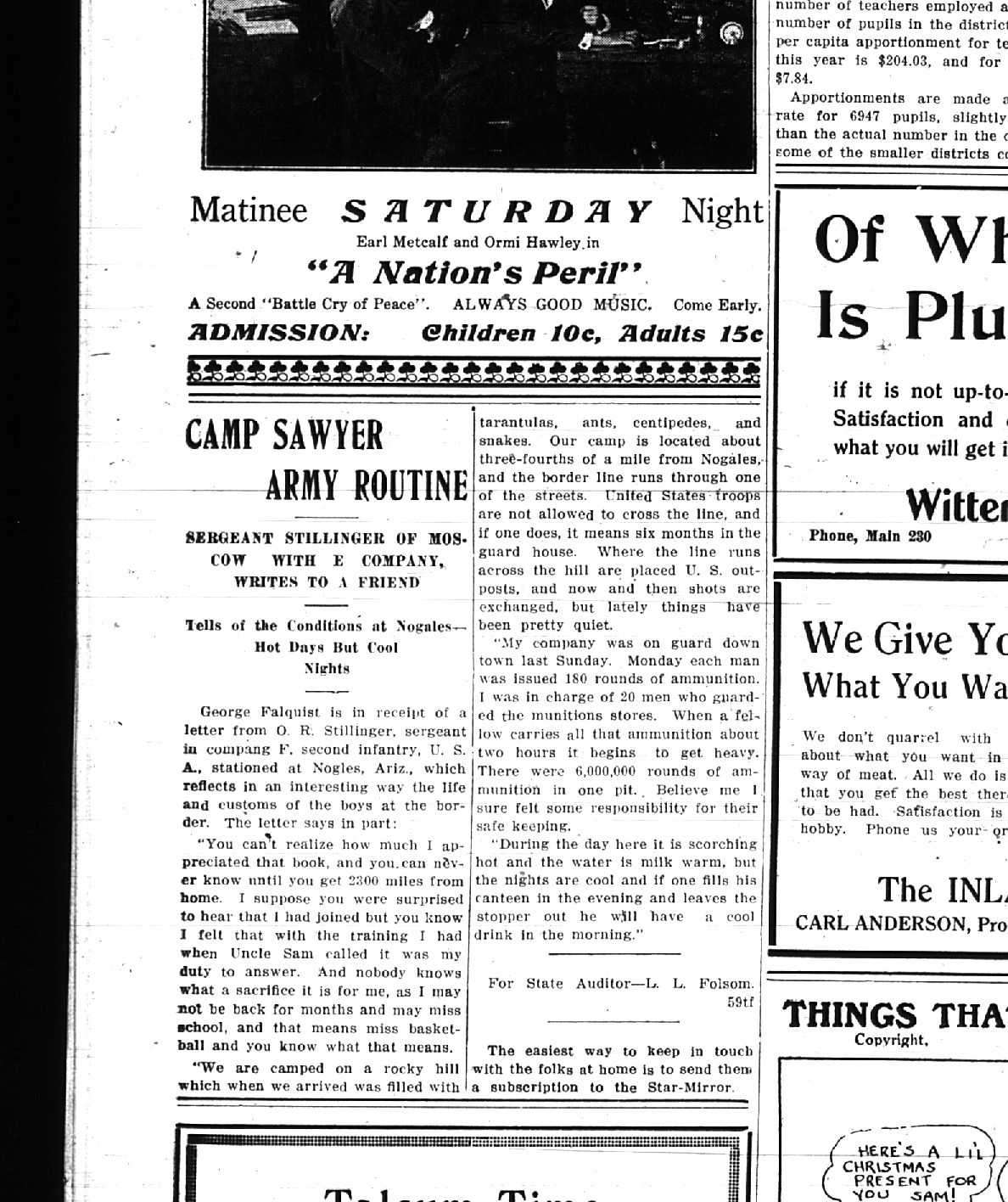 In an editorial in the local paper it was stated that women would vote to re-elect Wilson  “because he has kept us out of war” and because “ we did not raise our boys to be soldiers”  The senate passed a 6 million dollar appropriations bill authorizing improvements at the navy yards in Baltimore, Norfolk, Boston Portsmouth, Charleston, New Orleans, and “in the Puget Sound”  At the end of August the German government admitted it fired at an American steamer.  The boat “ignored the submarine’s signals and refused to halt.”    In the negotiations between the U.S. and Mexico agreement was near. “American commissioners have agreed to give immediate consideration to the withdrawal of General Pershing’s troops if an arrangement can be made for ample border protection.”

As the wheat and other agricultural product harvest approached there was both excitement and concern.   In early August “more than 100,000 bushels of wheat were sold “ in a single week. Orders for the necessary freight cars had been placed.   However, agriculture department forecasts for wheat, corn and oats were down from the previous year. There was talk of “the elimination of the nickel loaf of bread”   Wheat prices were currently more than a dollar a bushel and flour prices had increased proportionately.  By the middle of August when the harvest of local wheat began wheat buyers were purchasing all the wheat they could “at prices which range to $1 a bushel and better” Because of the potential for a railroad strike there was concern for sufficient cars to ship the grain.  Much of the grain was from the 1913 and 1914 crop ”which had been held . . . for an advance in price.  Before the local harvest began local wheat was selling for $1.10 to $1.12 bushel.  In early September, “The federal bureau of crops forecast barely enough spring wheat or home consumption.” Even with the railroad strike averted, there was a threatened shortage of railroad cars for transport of the grain.

Politics was a concern especially because it was a presidential election year.  Charles Evans Hughes was the Republican candidate and Woodrow Wilson was seeking a second term.  Wilson planned a short nationwide campaign beginning in mid-September.  Hughes, however, began his nationwide campaign tour in August . It included a speech in Coeur d’Alene.  The local railroads offered a special train to take people to Spokane and the Coeur d’Alene, if 100 people would show an interest. The train was cancelled the following day when over 150 people indicated they would be going by car.  The paper reported that Hughes spoke to a large enthusiastic crowd 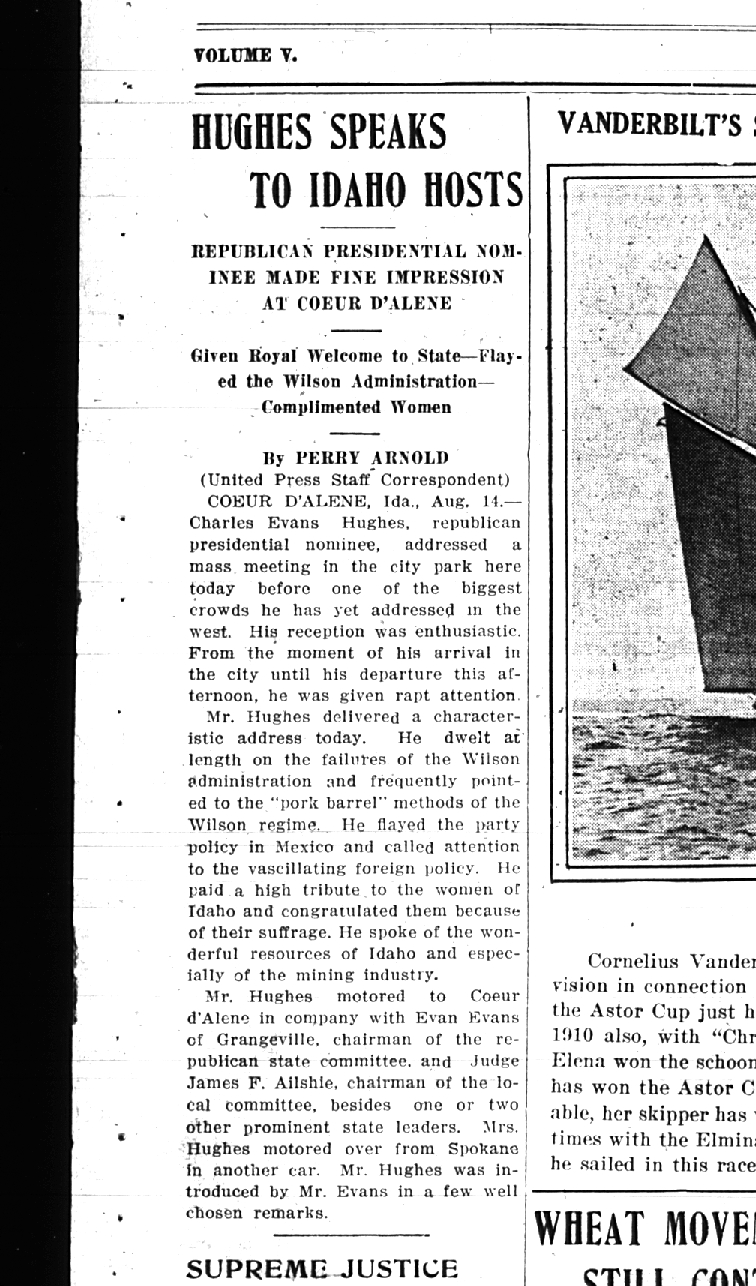 There were other candidates for office who were also of local interest.  Burton D. French of Moscow was the Prohibitionist candidate for congress and A. B. Clark was the Socialist party candidate.

Even in 1916 there were acts of terrorism.  In July there had been a bombing in San Francisco that killed nine people.  In Mid-August five people were arraigned for that bombing. The defense for Warren K. billing, charged with murder in the case, produced a witness with a strong resemblance to Billings.   He was convicted of murder for placing a bomb at the parade site and sentenced to life imprisonment. The defense requested a delay in sentencing and asked for a new trial after a new witness suggested that Billings was not the person who placed the bomb.

Idaho had passed a law prohibiting the sale of liquor in 1915.   Nevertheless temperance remained an issue of concern.  The State Anti-Saloon League was planning to have a convention of “drys” in Moscow and similar one in other parts of northern Idaho to have Idaho remain a dry state  The WCTU (Women’s Christian Temperance Union) was actively “ in support of the proposed constitutional amendment for state wide prohibition. ”  It planned to cooperate “with other local organizations [to] campaign for votes for a constitutional amendment to keep the state of Idaho dry forever” A prominent temperance speaker was scheduled to talk at the park on September 17.   Even before that lecture Dr. Howard H. Russell, the founder of the Anti-Saloon League spoke at the Methodist church.

If you made it this far you must be uniquely interested in the First World War.  We at LCHS are working on an exhibition and related article on the First World War and its effect on Latah County.  If you are interested in assisting in research for this exhibition (no experience necessary) do not hesitate to contact Zach Wnek, Museum Curator at 208-882-1004 or zwnek@latah.id.us .

The Circus is Comming!!!

The circus was a very special event across American in the early 20th Century.  I was recently researching the circus and its effect on Latah County when I came across this wonderful circus route across the United States in 1912.  So I decided this was a great opportunity to map the route of the Sells-Floto Circus in 1912.  Below you will find the map.  Please note that the different colors represent different months.  Click on any pin to see the city and date that the circus was in town.  Enjoy!