“A woman is the full circle. Within her is the power to create, nurture and transform.”
-Diane Mariechild

This March, we celebrate Women's History Month, and here in Latah County we owe thanks to many women who have helped create, nurture and transform our community. Throughout history, women have gone unnoticed, unappreciated and forgotten because of written history accounts. But in reality, we would not have societies without the work of women.

In August of 1895, the Ladies' Historical Club of Moscow was founded. The club was started by thirty women with the motto, “progression brings happiness.”[1] These women worked tirelessly with the Moscow community to preserve and curate its history, and in doing so, they have created their own history.

In 1894, The Pleiades Club, composed of seven women and named after the astrological constellation, was considered “one of the first federated clubs in the state”[2] and the oldest women's club in the entire state of Idaho.[3] The Pleiades Club was, and still is, active in the Moscow community. The interests of this particular club are literary, social and scholarly. In 1901, the Pleiades helped bring Moscow our first library and had it up and running in five years by their diligent fundraising.[4] A member of this club also founded the Moscow Historical Society, which would eventually become the Latah County Historical Society that we know and love. 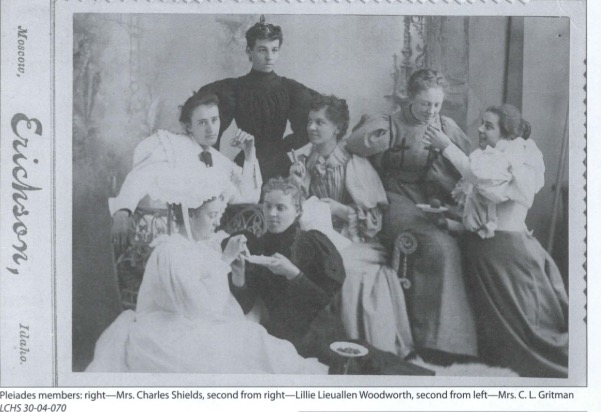 Even after women gained suffrage in 1920, some women saw voting as an arbitrary act for themselves. The GFWC of Moscow, however, decided to encourage women to have their voices heard in the government. In 1933, President of the club, Mrs. Grace Morrison Poole addressed these women by saying, “Women in a changing world has got to take an interest in politics otherwise democracy is a failure.”[5] She went on to say women need to take a stand in their local governments in order to implement real change.

Women in Latah County have been advocating for women's rights as well as preserving the region's history for generations, and continue to do so today.

If you want to know more about these clubs and the women in them, please visit Latah County Historical Society and ask to see PAM 2006-04.01

Lionel Hampton, His Legacy and the UI Jazz Festival

Lionel Hampton, His Legacy and the UI Jazz Festival
By: EmilieRae Smith

Every February, Moscow holds one of the oldest and largest jazz festivals in the world.[1] The tradition started in 1967 as a one day event and has grown to the four day experience we now know. The festival brings together students from elementary, junior high, high school and college with workshops, clinics, special exhibits and concerts. In 1981, the festival reached national status when Ella Fitzgerald performed. It was in 1984, however, that the festival really came into its own.

It was in 1984 that Lionel Hampton first performed in Moscow. He saw the enthusiasm the students had and pledged to support the festival.[2] In 1985, the University of Idaho renamed the jazz festival in his honor.

The "Jazz in the School" program began in 1995, which takes the visiting artists to elementary schools across northern Idaho and eastern Washington to introduce and teach students about jazz music.[3] Hampton continued to help out and show his support throughout the years. He attended sporting events and came to several more jazz festivals.

In earlier years, Lionel Hampton played in the racially integrated Benny Goodman Quartet throughout the 1930s. After that, he started the Lionel Hampton Orchestra in 1940.[4] From there he toured the world with his music and as a Goodwill ambassador. Him and his wife, Gladys, founded record labels, a music publishing business “and a company that built low-income housing in inner-cities.”[5] He was awarded the National Medal of Arts in 1997 by President Clinton and appointed to the Board of the Kennedy Center in 1992 by President George H. W. Bush.[6] Hampton continued playing music until he passed away in 2002.

Hampton was not only an outstanding jazz musician who revolutionized the sound with the vibraphone, but he was also someone who cared deeply about humanity and education. In honor of Black History Month and the Jazz Festival being this past week, we celebrate all that Lionel Hampton has accomplished throughout his life and in Moscow. If you missed the chance to attend the festival this year, be sure to mark your calenders for next February.

If you'd like to see more pictures of Lionel Hampton at jazz festivals from previous years, please visit Latah County Historical Society and ask to see their collection in their photo archives.